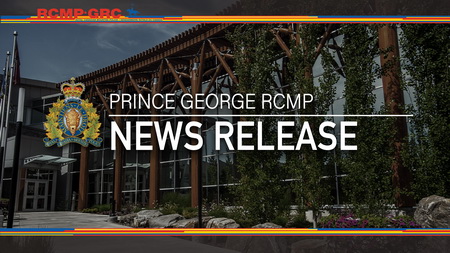 PRINCE GEORGE, BC: Just after 12:30 AM on June 8, 2021, while on routine patrols, a member of the Prince George RCMP’s Municipal Traffic Services observed a vehicle traveling at 43km/h in a posted 70km/h zone. The member attempted a traffic stop on Highway 97 N near Northwood Pulpmill Road; however, instead of stopping for police the driver fled down a dead-end road.

Frontline members attended the area and attempted to locate the vehicle and driver. Police are familiar with the driver and know he has a driving prohibition. The vehicle was located and fled from police a second time and the driver rammed through a set of metal gates and into a large field. The passenger ran into the field and was located and arrested with the help of a Police Dog Services team. The driver was located a short distance away, having gotten the vehicle stuck on a hill.

The male driver resisted arrest and attempted to spray members with bear spray; police took the male into custody and transported both parties to the Prince George RCMP Detachment.

Police released both the driver and the passenger with future court dates.

The investigation is ongoing.