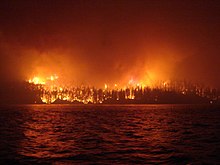 Following an investigation, the BC Wildfire Service has determined the cause of the 2017 Elephant Hill wildfire.

This wildfire started on July 6, 2017, about 2.5 kilometres southeast of Ashcroft. It eventually burned 191,865 hectares in B.C.’s south-central Interior region, including parts of both the Kamloops Fire Centre and Cariboo Fire Centre.

Other potential causes of the fire were eliminated as part of the investigation, including:

The BC Wildfire Service and RCMP investigations did not uncover sufficient evidence to identify the person whose actions started the Elephant Hill wildfire. Therefore, it was not possible to lay charges or pursue cost recovery for damages caused by this fire. The BC Wildfire Service’s investigation into the Elephant Hill wildfire is now complete and no further action will be taken at this time.

Written and released by BC Government