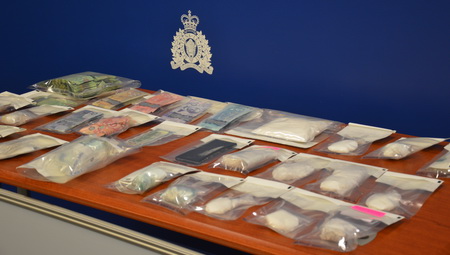 PRINCE GEORGE, BC: While on patrol, the Downtown Safety Unit noticed some suspicious activity that resulted in the seizure of over $30,000 in illicit drugs and cash.

On Friday, September 24, 2021, members of the Prince George RCMP’s Downtown Safety Unit were on routine patrol on the 1500 block of Victoria Street when they observed a vehicle known to them in a parking lot of a nearby business.

While interacting with the suspects, Downtown Safety Unit members observed what appeared to be a significant quantity of crystal meth in their possession.

Police arrested one male in connection with the suspected drugs; he was later released from police custody pending the outcome of the investigation and charge approval from Crown Counsel.

“In total, Downtown Safety Unit members seized more than a kilogram of what appears to be crystal meth, cocaine and fentanyl, as well as over $30,000 in cash. The quantities of the drugs are consistent with what police see in drug trafficking”, states Cpl. Jennifer Cooper, Media Relations Officer for the Prince George RCMP.

If you have any information about this or any other criminal offence, please contact the Prince George RCMP at (250)561-3300 or anonymously contact Crime Stoppers at 1(800)222-8477 or online at http://www.northernbccrimestoppers.ca

Released by the Prince George RCMP

If you need to talk to someone PJXM has provided contact numbers below to help you in time of crisis!