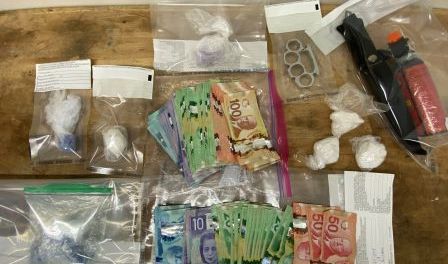 TERRACE, BC: A complaint about an erratic driver led to police seizing drugs, cash, and weapons following a traffic stop Friday night.

On July 17, around 11 PM, a Terrace officer was on Lakelse Avenue when he was approached about a vehicle driving erratically toward Thornhill.

Police located a vehicle matching the description in Thornhill. A traffic stop was initiated after police observed a number of driving offences.

During the stop, police discovered a prohibited weapon and arrested the driver. After talking to him, police conducted a roadside field sobriety test and subsequently arrested the man for impaired driving. More weapons, drugs, and a large amount of cash were located by police inside the vehicle, all of which were seized.

The driver received a driving suspension and traffic violation tickets. The investigation surrounding the drugs, weapons, and money is ongoing.

Anyone with information related to this file is asked to please call Terrace RCMP at 250-638-7400.

Written and released by Terrace RCMP