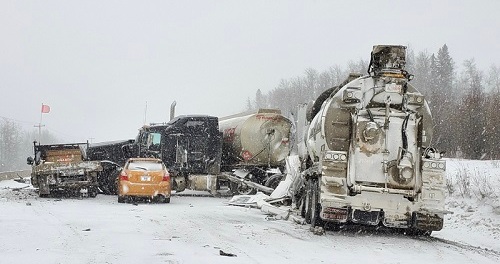 Upon arrival, officers located a commercial semi, vac truck, flatdeck truck, service truck, welder pickup, and a car all piled up with varying degrees of damage. The commercial truck blocked most of the road with the first tanker leaking diesel fuel after it was struck.

“This collision occurred during a time of extreme winter road conditions and peak traffic flow for workers returning home after work,” said Cst Connor Watson. “Thankfully, only two people sustained minor injuries and both have since been released from hospital.”

Poor weather conditions are blamed for the crash as it was snowing heavily before the crash occurred. A Winter Storm Warning remains in effect for some regions in BC North.

As for the cleanup, the Fort St. John RCMP has partnered with various government ministries to ensure that the highway is re-opened as soon as possible and that the impact to the environment remains minimal.

Keep updated using DriveBC for the latest on the Alaska Highway closure.