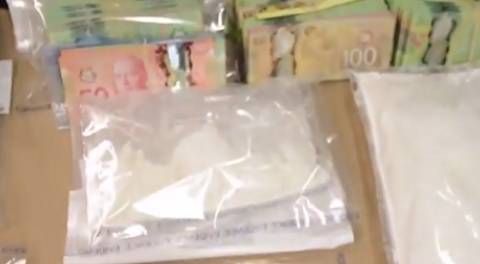 ALERT Grande Prairie’s organized crime and gang team made the seizure on October 13 with the assistance of RCMP Grande Prairie officers.

Two local homes were searched following a month-long investigation into the suspected drug dealing of Karman Singh GREWAL, 24, of Langley, BC and Elson Blue JOY, 22, of Kelowna, BC.

Evidence to suggest drug dealing was seized from both homes, with the value of the bust estimated at more than $150,000. The following items were seized:

“The seizure and the disruption of this criminal group will help to reduce the negative community impact created by the local drug trade. This seizure highlights the importance of a coordinated provincial effort to stem the movement and sale of controlled substances,” said RCMP Grande Prairie Officer in Charge, Supt. Don McKenna.

ALERT launched its investigation in September 2016.

Members of the public who suspect drug or gang activity in their community can call local police, or contact Crime Stoppers at 1-800-222-TIPS (8477). Crime Stoppers is always anonymous.