Police shut down Highway 16 West at Ferry Ave due to a serious crash further up from this location.

PRINCE GEORGE, BC: The Prince George RCMP has released details on a fatal crash which occurred Friday afternoon…

Police say at approximately 12:30 PM, emergency services including the Prince George RCMP and North District RCMP were called to the scene of a two vehicle collision at the intersection of Highway 16 and Vance Road in Prince George.

Upon arrival, officers found an SUV and a pickup truck hauling a utility trailer had collided and ended up in an empty lot located next to Peden Hill. 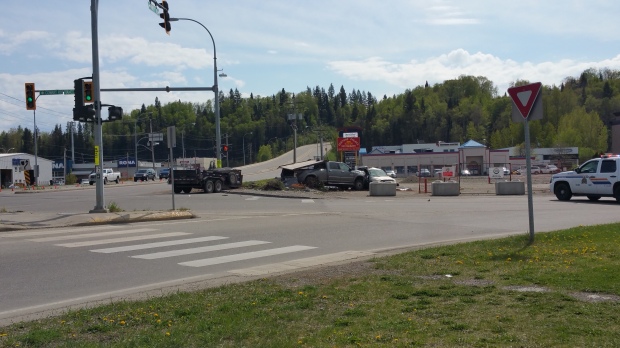 A utility trailer struck the traffic lights, ripped the back end of truck apart and pushed the SUV off the highway into an empty lot on Vance Rd. PHOTO – PJXM News

The occupants, two teens of the SUV and the lone occupant of the truck were taken to the University Hospital of Northern BC for treatment.

At 6:00 PM Friday evening, the 15 year-old female passenger of the SUV passed away as a result of injuries sustained in the collision.

A portion of Highway 16 was closed to traffic until late this evening while investigators gathered evidence. Traffic was backed up for several hours in the area and crippled lunch time and after school commuters heading west. It took 2 1/2 to 3 hrs to get off the westbound lanes of the highway for many motorists.

Police are asking motorists if they may have witnessed the collision and have not spoken to police, please contact the Prince George RCMP at 250-561-3300.